The East African Division of the International Academy of Pathology (EADIAP) was inaugurated on 23rd October 2008 at a ceremonial launch during the 9th Biennial Congress of the Association of Pathologists of East, Central and Southern Africa (APECSA) held in Mombasa, Kenya. The inauguration in Mombasa followed ratification of the EADIAP by the IAP Executive Council at the 27th Biennial International Congress of the IAP in October 2008 in Athens, Greece. The IAP was founded in 1906 by Maude Abbot as the Association of Medical Museums (IAMM) whose name was later changed to International Academy of Pathology (IAP), visit http://www.iapcentral.org for more details. The EADIAP thus joins the IAP as the 4th Division in Africa, the others being the South African Division, the Francophone West African Division and the Anglophone West African Division.

Formation of the EADIAP was initiated at the IAP Centennial Celebration during the 26th Biennial International Congress of the IAP in October 2006 in Montreal, Canada. The initiative was lead by a Founding Interim Committee comprising pathologists from East Africa who attended the 2006 Congress in Montreal, together with like-minded pathologists back in East Africa who become Founder Members of the EADIAP. The Founding Interim Committee members were Dr Michael Odida (President), Dr Ahmed Kalebi (Secretary), Dr Moses Njue (Treasurer), Prof Ephata Kaaya (Councilor Tanzania), Dr Lucy Muchiri (Councilor Kenya) and Prof Henry Wabinga (Councilor Uganda).

The launch of the EADIAP was marked by the inaugural AGM, the Constitution was formally adopted and the first Council was formally elected. Through links with the new EADIAP, a number of high profile international speakers participated in the APECSA Congress where they delivered high-quality educational talks and slide seminars including symposia in Gastrointestinal Pathology by Prof Robert Riddell, Prof Hala El-Zimaity, Prof Richard Kirsch and Prof Neil Shepherd; Placental and Gynaecological Pathology by Prof Drucilla Roberts, Prof Mary Tambouret, Prof Francis Jaubert and Dr Shabin Nanji; and a lecture on CNS Haematolymphoid neoplasms by Prof Adekunle Adesina.Symposium. A workshop on Pathology in Africa was conducted by Dr Ann Nelson as a follow-up to a W.H.O. sponsored Consensus Meeting that was held earlier in Dar-es-Salaam Tanzania in May 2008.

Membership of the EADIAP is primarily drawn from the countries within the geopolitical boundaries of the East African Community (see Constitution). Membership is also open to pathologists from neighbouring countries (Ethiopia and Seychelles) and other African countries that have not as yet formed their own IAP Division (Botswana, Malawi, Mozambique, Zimbabwe and Zambia). Members of EADIAP are automatically members of the IAP. Membership to the EADIAP is also welcomed for all pathologists from across the world.

The mission of EADIAP in line with the objectives of the IAP International is to advance the frontiers of Pathology in the East African region, the entire African Continent and beyond.

Aim and objectives of EADIAP

The aim of the society shall be to::

Publish your article in the first dedicated pathology journal in the region. Learn more... 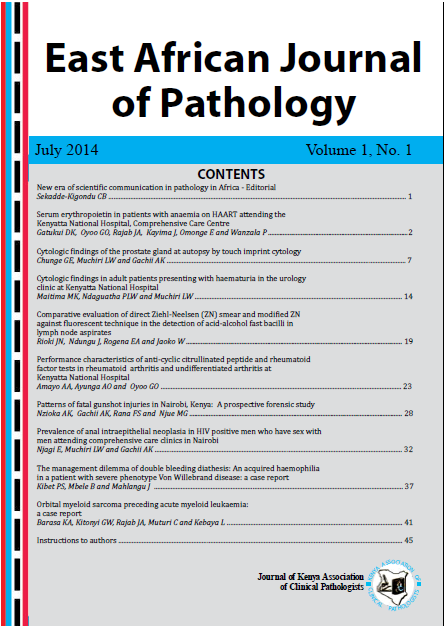 Information on this site is intended for use and interpretation by medical practitioners.
www.eadiap.org  |  Copyright 2015